To every adult who still foolishly thinks they’ve outgrown their skin, this one’s for you.

A few things to keep in mind

There are two main and very simple rules to this one: a) keep it simple and b) no humans are allowed. The following is a collection of stories from far-away lands where no human footprint can be found. All writers are encouraged to make the best out of their word-limit, be it prose, poetry, illustrations, or all of them combined. Brew your coffee, sip your tea, or down a glass of whatever alcohol you may find near you. Produce your best brain farts.

Once upon a time, in a far-away land, there was a flower that grew out of a rock. Its petals were solid; its soft parts hard. 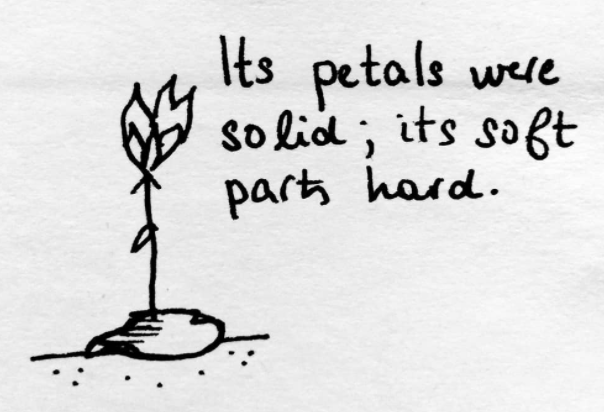 All the flowers around had names and colours and admirers; this one had none of the aforementioned. It simply existed among the cacophony of hues and smells.

Strange as it was, this flower received torrents of stinging words, slander and defamation. “You bizarre specie”; “You’re as rigid as a mountain”; and, most annoyingly, “You will never have a name.” Even the sun deemed it too tough for its own good, and the clouds though she was undeserving of their tears. But this rock-grown flower knew better than to feel sorry for itself.

The rocky flower grew weary and disheartened. It wished death upon itself, yet how can death bend the life of a rock? At that instant of absolute sorrow, the wind blew from all four corners. The flowers around began to dance, cackling softly and making of the outcast, “What are you, deaf? Can’t you hear the wind singing?” Yet the flowers were too busy flaunting their petals and thorns, that they’d misread the message the wind had been carrying. A change was coming: the season was overturning.

Fall came howling through the trees, and all the flowers died. They undressed themselves and wilted against the power of the climate. Yet our flower remained solid, standing upright, receiving rain and sunshine with a brazen spirit. It waited four long seasons before it could meet its abusers again; and, just as they bloomed again, the lampooning resumed. “You’re still alive!” they all laughed in unison.

This did not bother the rocky flower. For it knew something the others didn’t. The flower they mocked had witnessed the change of the seasons, and they did not. Their pride hindered them from understanding that that same flower they hated knew a life that revolted against itself, a sun emasculated by the moon, a drought that made mountains burst in rivers of tears, and a breeze that taught a gust of wind how to serenade a broken heart.

The flower that grew out of a rock knew all this. The others knew nothing.

did you know that squirrels sound like water when they are playing catch? One sits still on one side of the tree, the other tries to find the other, jerky movements and the imitation of water, buckets, metal, drips, volcanic eruptions. After some moments of stillness they move fast, running around the tree, trying to locate the other, by sound of waves and licks. The other squirrel sounds like fog. We forget that fog is water. What happens when they catch each other? Got distracted by the wind so I don’t know.

They say rivers and rocks have souls, but that’s honestly wishful thinking. Rocks do not have souls. Rocks have minerals. Rocks exist and they sit. They are rocks. They do not move, they do not think. Perchance a salmon jumps from its river and onto a rock, a rock will not yell out in pain or surprise as a cat might. It will be be crushed under the weight of the fish as an ant will. It simply stays ever still, ever without thought, ever without response.

Nonetheless, a rock does have a spirit - in a roundabout way of thinking about things. Rocks grow over millennia as trees do. They erode into smaller rocks, as though giving birth. One large rock crushed by suitable pressure, or sustained movement from a waterfall will, over time, create younglings that travel down the river and into the ocean. Eventually, they become sand and the cycle begins anew.

Vines, moss and algae also find a home in the immovable. The calmness provides stability sought out by the lower, wet, specimens of the plant world. Where else to build a better home than the cool surface of a rock? Where underneath, eternity is forgotten?